Let me start this off by saying I love Thai food. However I’m very picky with it because of two reasons:

That said, I do like trying new Thai places. We came to Mukada for dinner in May of 2012 for my mom’s birthday. She’d heard about it from a Thai coworker who said that she ate here whenever she wanted a taste of home. That was enough of a recommendation for me, so off we went!

The decor was a bit odd. It looks almost like a cross between what I imagine a diner in Thailand would look like and a proper fancy pants restaurant. It wasn’t bad though, and it was clearly well maintained.

The staff was very nice and cheerful and I enjoyed their enthusiasm. They acted as if they really excited about having us there. That kind of welcome and attentive service is always appreciated. On to the meal!

As an appetizer, we had a papaya salad. My sister asked for it medium spicy, but it still had quite the burn to it. It blends sweet and spicy very well and I really enjoyed it. It was served in the juices of the fruits it was made of, which was filled with flavor. They seasoned this thing to perfection. It was a new taste for me and a great way to start the meal off.

As far as drinks go, we tried both their Thai iced tea and Thai iced coffee. Both were phenomenal! I’ve only had Thai iced tea once before and didn’t like it. I’m glad I gave it another shot because this was worlds better. I’m not sure what they used to sweeten it because it tasted different than other drinks sweetened with sugar I’ve had before, but whatever it was gave it a fantastic flavor. The Thai iced coffee was strong, which I wasn’t expecting. It was really good, though. There was a hint of chocolate flavor in it as well, which I loved. This is the first time I’ve tried Thai iced coffee (or even heard of it), so I don’t really have anything to compare it to. Given the excellence of the Thai iced tea, I suspect the Thai iced coffee is of the same caliber, so I think other restaurants will be hard pressed to beat it. 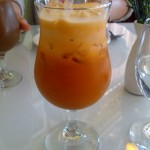 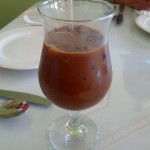 We tried three different entrees on this evening. My mom ordered an item listed as E7 on the menu: Pad Ka Tiem (chicken & garlic sauce). I have two words for ths: Holy hell! Now here are some more words: This is the best damn garlic sauce I’ve ever had! The flavors are explosive! The peas and carrots are so tender and the chicken just falls apart in your mouth. I can’t even begin to put into words how much I love this. That’s probably frowned upon for a review, but listen: go eat this. That’s what you need to know.

My sister ordered the E6, Pad Prew Wan (Salmon with sweet & sour sauce). The sauce is more sweet than sour, but it’s not bad. It’s got a kind of ketchup like taste which I’m not too fond of, but the salmon is cooked to perfection. Buttery soft and melts in your mouth. So far, I have to say they cook their meats and veggies really well. Nothing is too dry or too tough or undercooked or anything along those lines. Exceptional all around.

And what did I have, you ask? I shall tell you! I ordered the R2, Basil fried rice made spicy (yes, that’s exactly how its listed on the menu). The flavor of basil is strong, as it should be. The rice was super soft and had a great texture. And the seasoning of the rice was spot on! It practically melted in your mouth. The recurring theme of “Let’s cook all of the food until super tender!” continues with this dish, with one exception. The beef wasn’t quite as tender as the other things I tried, but that’s not to say it was too chewy or tough. It was actually quite good, just not quite as excellent as the other meats I’d tried. I asked them to make it extra spicy for me because I’m an animal, and they did quite well in that regard. This wasn’t no “Oh my, black pepper has quite a sting to it,” kind of spicy. It had a great burn. Incidentally, the iced tea is great for putting out that fire.

Ranking the three entrees we tried, I’d have to put the Pad Ka Tiem first, the Basil fried rice made spicy second, and the Pad Prew Wan third. An excellent meal all around, and a thoroughly enjoyable experience! We didn’t have desert on that visit because surprisingly, their desert menu was SUPER generic. Vanilla or chocolate ice cream, sliced fruit, and rice pudding, along with one or two other staples. Pretty run of the mill stuff and nothing with a Thai influence at all. Disappointing considering how on point everything else was.

There’s one more thing I’d like to mention about this place. Recall that I’d asked for my food to be extra spicy. While they did a good job with that, please understand that I tend to eat fire for fun. My mom is the same way. Consequently, we asked if they had any Thai style hot sauce or anything of the sort they could bring out. Our waiter grinned, gave a sort of half bow, and practically ran back to the kitchen. I was a bit confused by his reaction, as well as whether he was gonna go get some hot sauce or just go rouse a mob to chase us off for daring to defile their culinary masterpieces with condiments. Dude came back with… well, he came back with this:

Now I know why he was grinning. He left us the whole dish and said if we needed more, just to tell him. We were pretty surprised by that and I asked him if this was standard practice. He said that most people ask for the food to be made milder or if they eat it as is, they comment as to how it was really spicy, but just at the edge of what they can handle. Very few actually ask for more heat, and he was thrilled that people with refined palettes such as ourselves had stopped by today. Apparently the staff is happy to crank up the heat until smoke comes out of your ears because that’s exactly how they like their food as well.

We put a good sized dent in that peppery assortment, and let me tell you, that was some essence of magma right there. It burned so good, and just as important, it all had a great flavor to back up that heat. I was already on the path to give this place an excellent score, but this put them right off the charts. Very few places cater to chiliheads like me, so to see a place that does so, does it so well, and has absurdly excellent food to boot… well, how can I not give this place top marks.

Posted by Chunks on July 20, 2015 in Restaurant Reviews