I came here on 4/28/12 to celebrate a friend’s birthday. The decor is nice, but typical of a bistro. Its a modern/industrial look. Overall its appealing, but its dark as fuck and it was pretty cramped as well. I have to make a special note about the parking lot. It’s TINY! Like 5 cars tiny. I had to park down the goddamn street, like 4 blocks away! They take reservations here, so plan accordingly. I’ve noticed that some of my friends have a habit of really liking places that are impossible to park in front of. :| That aside, let’s move on to the food!

After looking at the decently varied menu, I decided to go with the $30 prix fixe menu. The menu looked pretty interesting and there were several things I wanted to try. The prix fixe option covered several of them, so I decided to go that route, figuring I’d go back and try the other stuff at a later date. And speaking of the menus, they look pretty cool. They have this big metal cover on the front. It looks really great, but it makes each menu fairly weighty. Delivering a stack of them to the tables can be a work out for the wait staff! Our group was 13 large and the waitress made 3 trips to deliver them. I felt bad for her!

The appetizer was an order of crispy chicken teriyaki wontons. They were phenomenal! Extremely flavorful, these are among the best wontons I’ve ever had. The presentation was pretty fun. They brought the dish out in a Chinese take out style box, sat on top of a small plate. 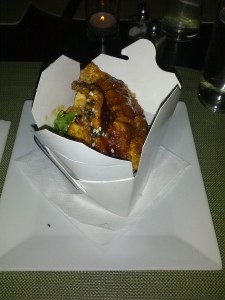 I have to pause here to mention the service. Overall, it was good, but the speed left a little to be desired. However, that might just be my own taste and not necessarily a bad thing. Our waitress was courteous and pleasant. She was definitely attentive to our needs. Despite that, I felt the courses took a little too long to come out. Granted we were a big group (13!), but it seemed to me 40 minutes for the appetizers, then a bit over an hour for the main course was a little much. To their credit, no one had complaints about the food getting cold or anything of that nature. Maybe I’m being too demanding, or maybe they have a slower pace to let people enjoy the atmosphere and talk more, but for my money, things could have moved along a bit quicker.

When the main course arrived, I was again pleased by the presentation. The chefs here are masters of visual design. Just take a look at my dish, which was pork tenderloins with mustard mashed potatoes and granny smith apple sauce.

But how did it taste? I’ll start with the pork tenderloin itself, as this is the main component of the dish. Unfortunately, it was also the most disappointing part of the dish. The pork tenderloin was so so. The bottom was super tough and stringy and somewhat charred. The flavor of the rest was good, but it was a bit dry. Moving on to the mustard mashed potatoes, I have only one question. Where have these been all my life?! I could have eaten tons of these! The flavor and feel were amazing; super creamy and tangy and with just the tinniest bit of burn. I’ve never had the like before or since. Pork chops typically come with apple sauce, but I don’t think I’ve ever seen granny smith apple sauce before. It tasted excellent, however it was a bit too watery and thin. That kept it from achieving greatness, but its still really good. I wish I could bring home jars of it.

And now comes my favorite part of the meal: desert! It was a chocolate chip brownie with a scoop of vanilla gelato. They used a very high quality chocolate and the brownie was really good. Even the chocolate chips in it were remarkable. They were quite smooth and blended with the brownie delightfully. The gelato set off the chocolate really well and you can tell that the brownie was fresh, not something frozen and reheated a few minutes ago. I’d show you a picture, but I was overcome by Fatty Fugue, which is basically a sort of trance-like state induced in a fatty when he or she sees something really good, like a crazy looking desert. Once I’d come out of this state and realized what I’d done, I decided I’d take a picture of the aftermath and show you that. 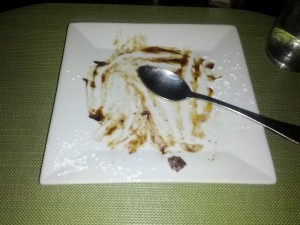 There were no survivors.

Overall, I’d have to say my experience here was a good one. Parking is a real issue, so come early or be prepared to walk. While the pork chop was a miss, everything else was spot on. I’ve got my preference for faster service, but I recognize that others may prefer their pace. I’d give it a 7/10.

Posted by Chunks on July 6, 2015 in Restaurant Reviews